When I was younger, I used to write stories all the time. All these stories about vampires and pirates and magic and animals that don’t exist. And sometimes I felt like I was in those stories. Like I was getting hunted by vampires, like I was a pirate, like I was some fantasy animal. Of course the stories I wrote were terrible, but I was nine so what do you expect? I used to want to be a writer. My Dad told me I shouldn’t aspire to be a writer because I probably wouldn’t make it. He was right, but I still nearly cried. I didn’t cry though. Crying isn’t something I do very often, and I never cry in front of people.

English was my favourite subject then. I don’t like it anymore. This term we studied ‘Lord of the Flies’ by William Goulding (I think he’s the author). I did my first ever gcse essay on the book, and I got a B. My Dad said that was disappointing; I agreed because I want to get straight A’s. I’ve always been confident I could get straight A’s, but not anymore. 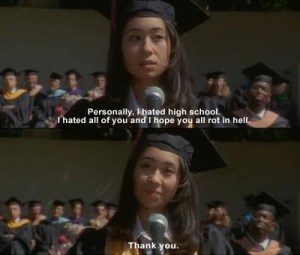 Because high school kind of squeezes out  every drop of confidence in you. At least that’s what I think it’s done to me. I hate high school. It was okay at first, back when I was caught up in trying to be cool and dumb and pretty. I woke up from the crazy dream I was living in last summer. I did something stupid with someone equally as stupid. But I don’t want to talk about that. But now I hate high school and what I let it do to me. It’s time to turn my life around. That’s my new years resolution: to turn my life around.